Why I love this Country 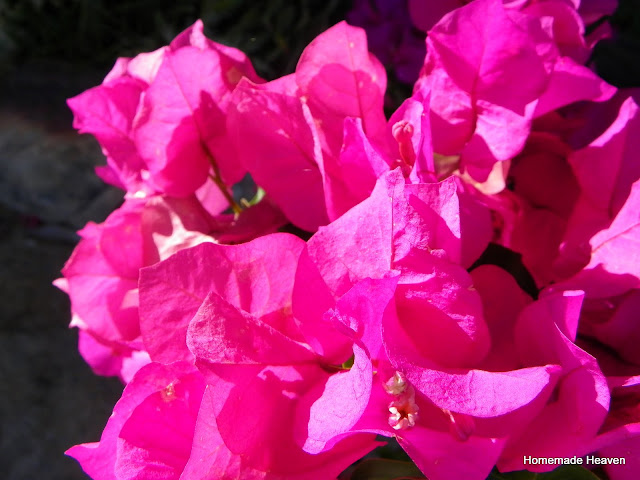 This weekend I spent the most wonderful time in Citrusdal, at Wolfkop Nature Reserve.

Below is the chalet we stayed in, definitely the most well equipped and comfortable self-catering accommodation we have had anywhere. Two air-conditioners, great kitchen, comforatable lounge chairs, TV (didn't even check to see if they worked, but you can take your DSTV smart card with), Jacuzzi, great braai area, percale cotton bedding...this was more comfort than home! 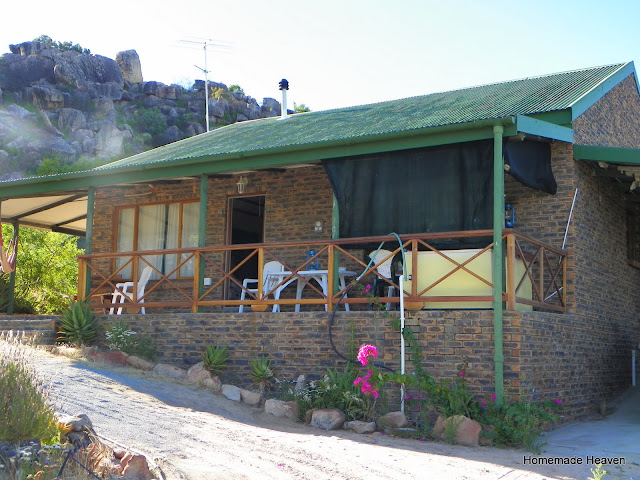 If I had any talent as a writer I would wax lyrical for hours, but instead I will just show you the photographs, as Kodak has much more talent than I in explaining beauty! 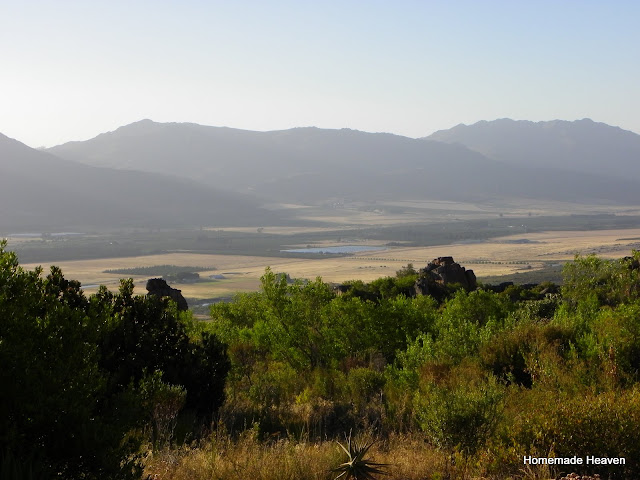 The valley below, just after sunset. 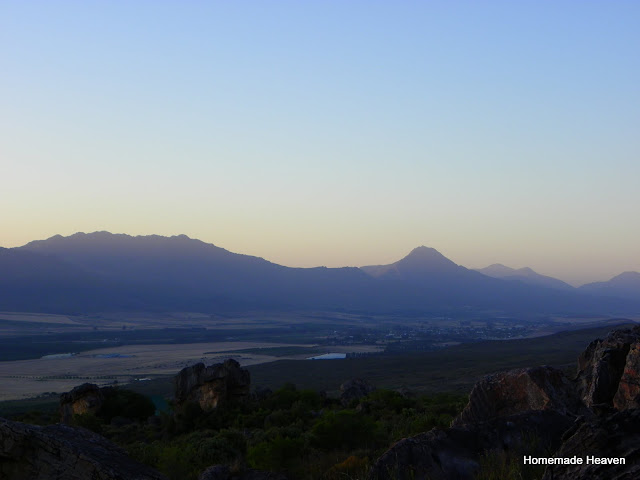 Preparing for the hiking - take one hammock, a good book and don't fight the heavy eyelids! 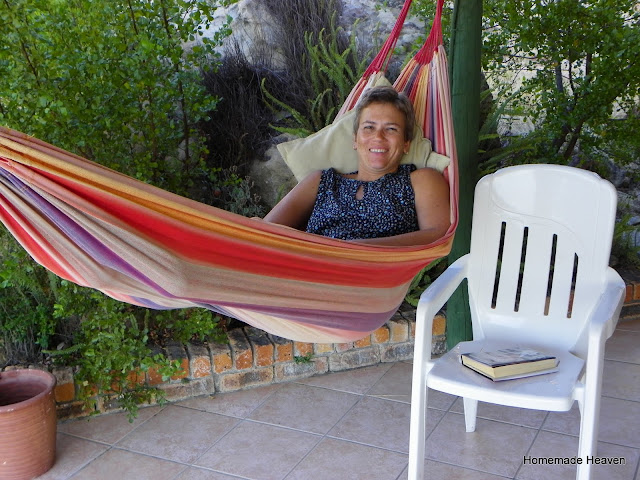 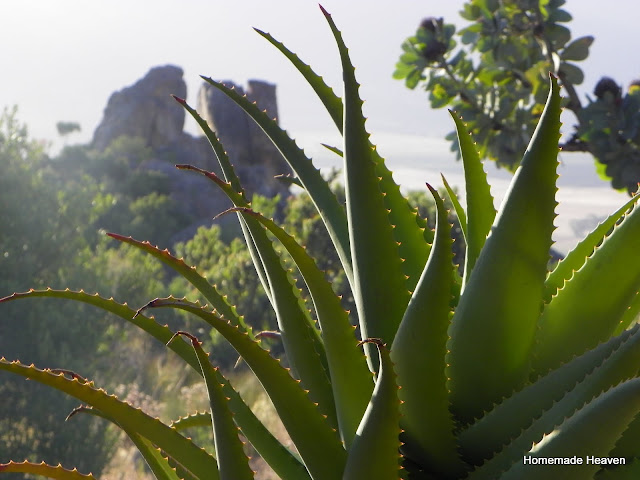 A warning to the "tree-hugger" out there, be careful what you hug, it might not hug you back with as much love! 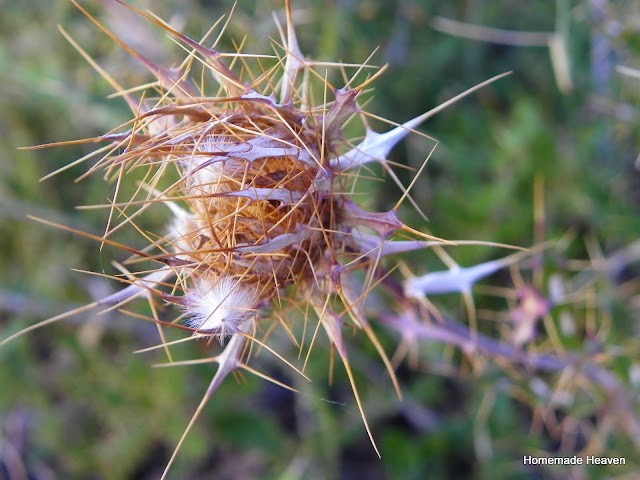 When hiking, you have to climb through the tough bits to get to the good stuff! 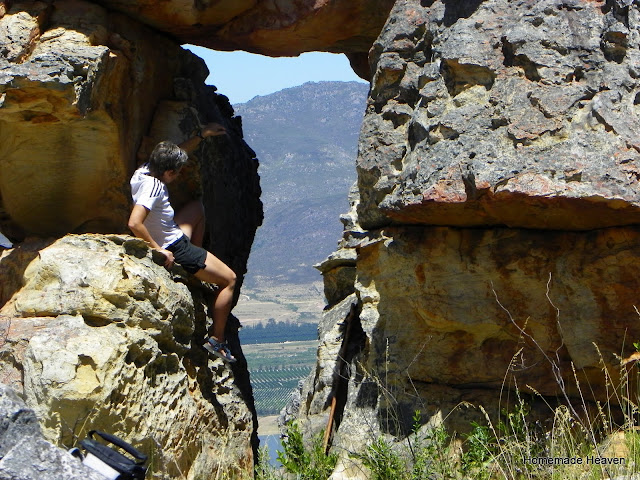 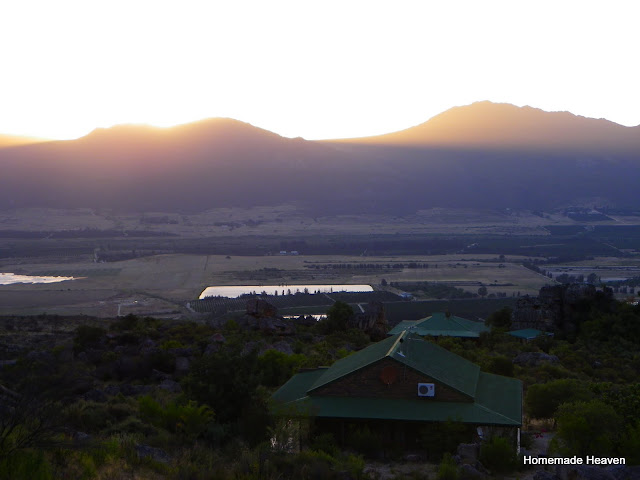 If you can, take someone you love with, I am so blessed to have Keith, to share in these wonderful moments and places. Thanks Keith for making my life such a pleasure to live. 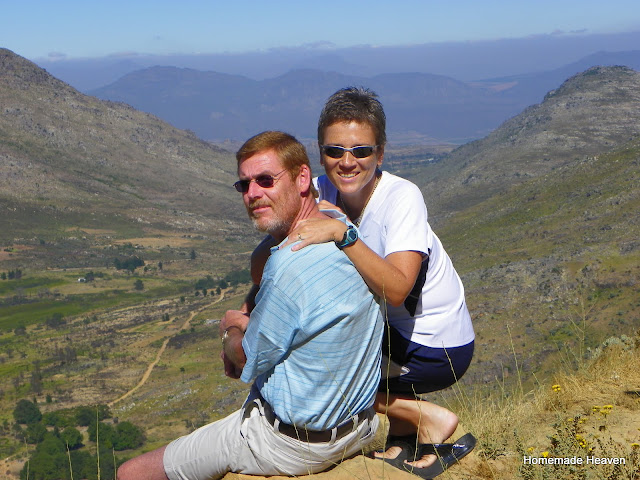 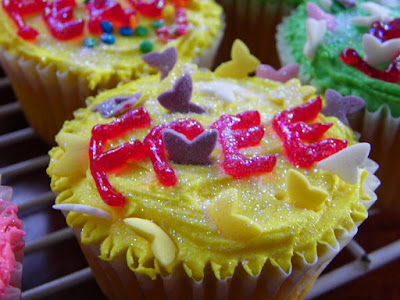 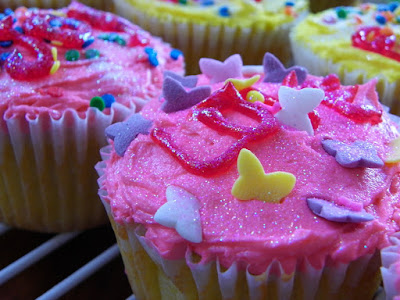 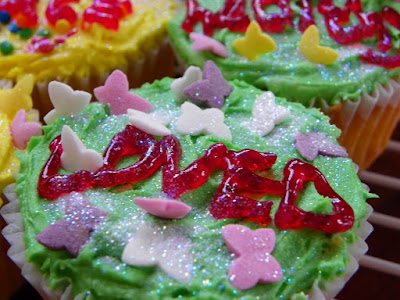 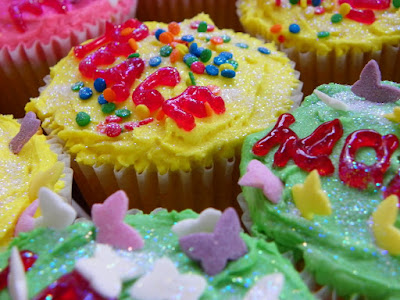 Fools Gold - All that glisters is not gold

When I was about 8 or 9 years old, I acquired a piece of "fools gold", which is actually iron pyrite. I was so excited; I had a real lump of gold! I proudly presented my treasure to my folks and it was then I learned the lesson: "All that glisters is not gold"!

South Africa is a country that has rich gold reserves, so I wasn't so far off the mark in thinking I had the real thing.

The first European prospectors found alluvial gold in Limpopo Province (South Africa's most Northerly province) between 1840 and 1870, but the first major gold rush only started in February 1873, at Pilgrims Rest, which is in Mpumalanga further to the East.

Legend has it that when Alex "Wheelbarrow" Patterson discovered his major strike, he shouted "Now at last, a pilgrim can rest!", within a year 1500 prospectors were there, having staked 4000 claims.

By 1898, the gold production was in the Witwatersrand (which stretches from Johannesburg to Welkom), part of the Zuid Afrikaanse Republiek and had exceeded the entire production of the United States of America! It was this discovery which led to the city of Johannesburg, which is aptly named by the locals as "Egoli" (The City of Gold). Within 10 years of finding gold in Johannesburg, the city had already grown larger than Cape Town, which was more than 200 years older.

It was only in 2007 that South Africa was surpassed by China as the world largest gold producer. It is estimated that 40% of the world's gold reserves are held here. The Witwatersrand basin, has produced more than 41 000 t of gold and remains the greatest unmined source of gold in the world. As of 2009, the deepest mine in the world is TauTona (Great Lion) in Carletonville, South Africa at 3.9 kilometers deep (2.4 miles).

The first claim (with the then government of the ZAR) was registered by an Australian, George Harrison. He sold his claim for £10 and was never heard of again. It is thought that he was forced to sell and leave the country, and then killed before he got home!

The Witwatersrand Gold Rush was a major contributing factor to the Jamison Raid and the outbreak of the Second Boer War. This war lasted from 1899 -1902, and it saw the introduction of the Scorched Earth policy.

This policy is where everything that might be useful to the enemy is destroyed by fire. The British systematically destroyed crops, burned homesteads and farms and poisoned wells. The Boer women and children were imprisoned in concentration camps, instituted by Lord Kitchener. Over 26,000 women and children were to perish in these concentration camps.

Towards the end of the war, British tactics of containment, denial and harassment began to yield results against the Boers and made it harder and harder for the Boers and their families to survive.

By May 1902, to prevent further bloodshed, the last of the Boer troops surrendered, mourning the deaths of mainly women and children who died in British internment camps. The independent Boer republic of the Transvaal was no more - the region became part of the British Empire . In 1910 the Transvaal became a province of the newly created Union of South Africa, a British Dominion. The war ended with the Treaty of Vereeniging signed on 31 May 1902.

The gold in South Africa was a prize far too tempting to the British Empire, and so the South Africans lost their independence and some would only regain it again in again in 1934. It would be another 60 years, almost to the day, before all South Africans could participate in a democratic general election.

So, back to the Fools Gold and Homemade Heaven Kitchen.

I didn't manage to manufacture gold bars (or Fools Gold) in my kitchen, that would be Alchemy, an ancient practice focused on the attempt to change base metals into gold. But I did make a pretty good cheats mayonnaise, which is worth more than a wheelbarrow of Fools Gold. And judging from the heartache that came from the discovery of gold in our country's history, I think I'll stick to making mayonnaise. 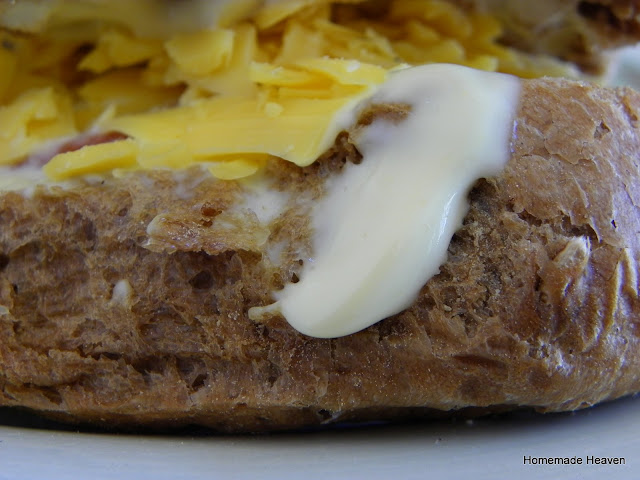 Quick and Easy Homemade Mayo
With a Stick blender

Place the first 5 ingredients in a jug (I use the plastic jug that came with my stick blender)
Place the stick blender in the jug and start whizzing.
Pour in enough oil until you have the consistency you wish.
Using a stick blender means you don't have to pour the oil in drop by drop, you can add it quite fast.
Check the seasoning, and serve.
Keep refrigerated and use within 2/3 days. 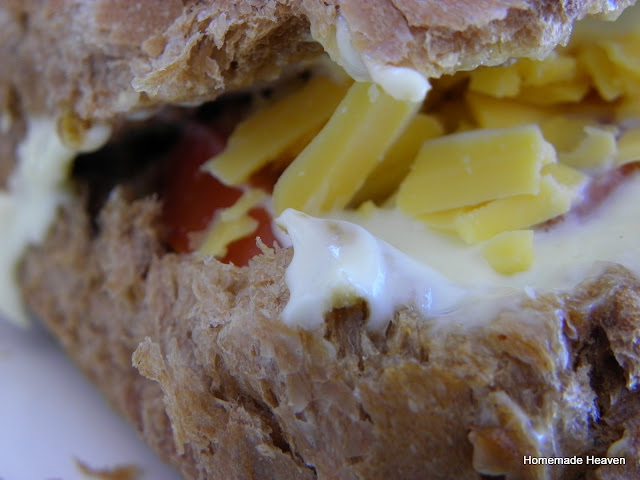 So I am back in the land of the working class, no more holidays and relaxation. Now it's work, getting ready for back to school and most importantly, planning 2010 in the blogosphere.

The first World cup was held in 1930, with 13 teams and was hosted by Uruguay. This year there will be 32 teams, with 8 group stages followed by a knockout of 16 teams - leaving a final winner!

The last World Cup was held in 2006, hosted by by Germany and was won by Italy in a 5-3 penalty shoot out against France. The highlight of the match, other than the Italians winning was when French captain Zinedine Zidane head-butted the chest of the Italian central defender.

Brazil has the record for the most world cup appearances (19), the only country to appear in every world cup. They have also lifted the winners trophy the most times (5). Germany have the record for being in the final 4 (semi-finals/finals), eleven in total. The strangest statistic that goes with Germany's record is that they have the most goals conceded against them - 112!

Now, this whole history wouldn't be worth anything if I didn't mention Diego Maradona, who has the record for most appearances as captain for Argentina. He played and captained in 4 championships, from 1982 - 1994. He also holds the record for the longest suspension from the game, 15 months for doping.

Well now that I have given you just about all the information you need to sound like a soccer expert, I will move on to the the fans.

The highest match attendance at a World Cup final was in 1950, where 199,854 people crammed into the Maracana Stadium in Rio de Janerio, to watch Brazil play Uruguay. The lowest game attendance was at a game in Uruguary 1930, between Romania and Peru, where only 300 people came to watch.

So you can see, this is a major sporting event and this year will be the first time it is being held in Africa - and in the most beautiful country in Africa, South Africa!

To celebrate this wonderful year of Africa, and South Africa especially, I plan to introduce and re-visit many of the wonderful flavours, cultures and histories of the people of South Africa and Africa as a continent.

I hope you will enjoy the experience, for those who can't get to come to South Africa for the celebrations, this will be the place you can come to enjoy Africa as never before.

So let's kick off with India! You might now wonder why India? India has given South Africa some of it's most colourful and beautiful people. A history of struggle and slavery but ultimately success, a culture that has integrated into the melting pot of the Rainbow Nation (as South African are called).

I have sourced this information from Proudly Indian.

The first Indians arrived in South Africa between 1860 - 1911 as indentured labourers. They were mostly Hindus from Madras. Mostly they worked on the sugar plantations, but also wherever cheap unskilled labour was needed.

Gandhi said that the single most creative time of his life (and the time that changed the course of his life) was when he was in South Africa, where he began to teach a policy of passive resistance to the South African authorities. Gandhi only returned to India in 1915, after the government of South Africa made concessions to his demand for recognition of Indian marriages and the abolition of the poll tax. Before this time, the South African govenrment (then still a colony of Britain) did not recognize the existence of Indians in South Africa!

So, the Indians came and added to this country, much more than just curry and a love of bright colours. We have the South African law relating to the 'Admissibility of Confessions', adapted from section 25 of the Indian Evidence Act of 1872. We have Algoa Bay (also known as Port Elizabeth), which means "towards Goa". And perhaps one of the defining characteristics of South African Indians today is their talent in business.

Some notable South African Indians include:
Frene Ginwala the first Speaker of the democratic post-apartheid National Assembly of the Parliament of the Republic of South Africa.
Hashim Amla the first player of Indian descent to play Test Cricket for South Africa.
Haroon Lorgat Chief Executive of the International Cricket Council
and of course, who can forget Schabir Shaik former financial adviser to Jacob Zuma?

Now we get down to the good part, the food! What would life be without curry? Definitely not Homemade Heaven!

Here is a delightfully easy prawn curry recipe, made by a South Africa - alas not authentic, but easy enough for those who are learning the ropes. 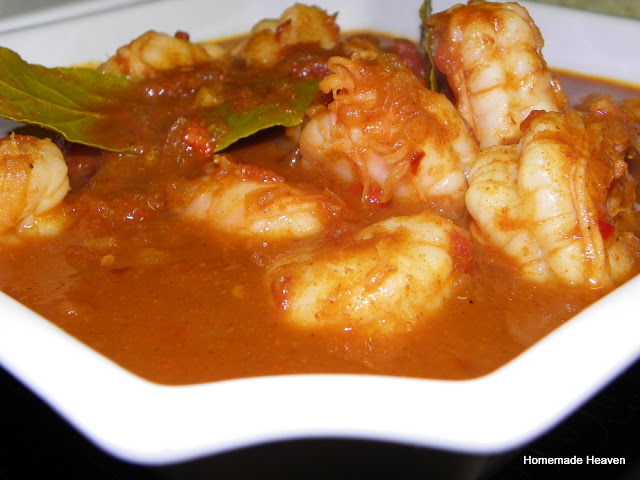 Fry the onions until soft and golden.
Add the spices (except the Garam Masala) and fry for one minute.
Add the tomatoes, sugar and a little water.
Bring to the boil and then reduce to a simmer for at least an hour adding water if it becomes too dry.
Once the sauce is cooked and the tomatoes have totally broken down stir in the garam masala and cook for another 15 minutes.
Increase the heat and add the prawns and cook until done.
Do not over cook the prawns, or they'll have the texture of rubber.
Serve with basmati rice and naan bread. 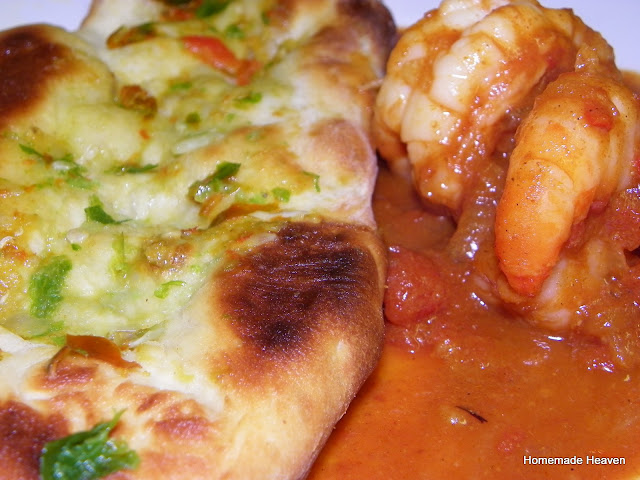 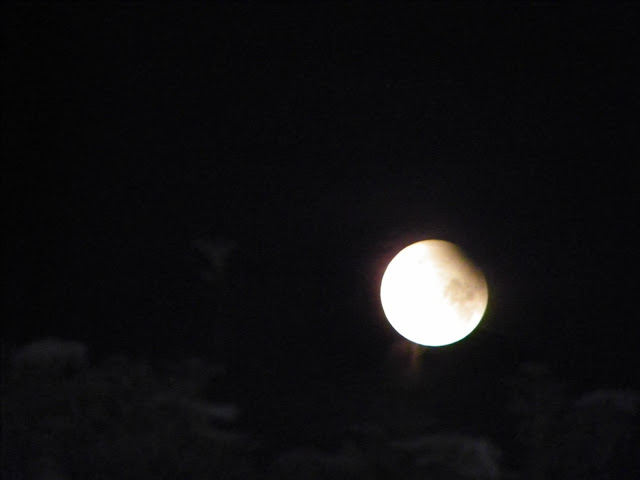 New Year's Eve - the eclipse of the moon.
Not a great photo, but spectacular.

We're still on holiday - eating, eating and more eating. No complaining, next week - back to work and boot-camp! 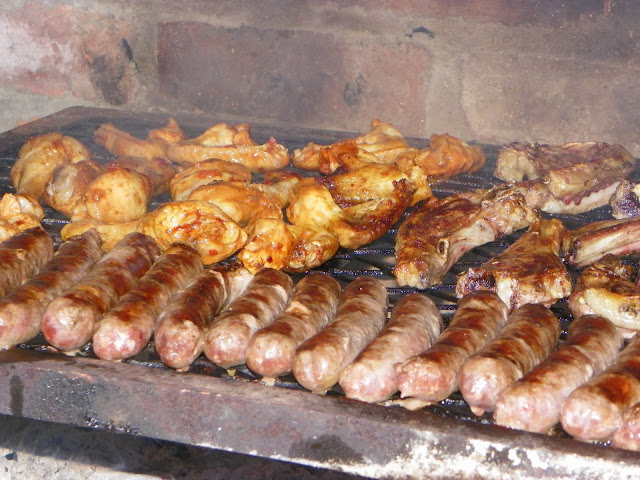 Our New Year's Eve Braai (BBQ), served with (amongst other things) a family favourite - Potato and Butternut Bake. 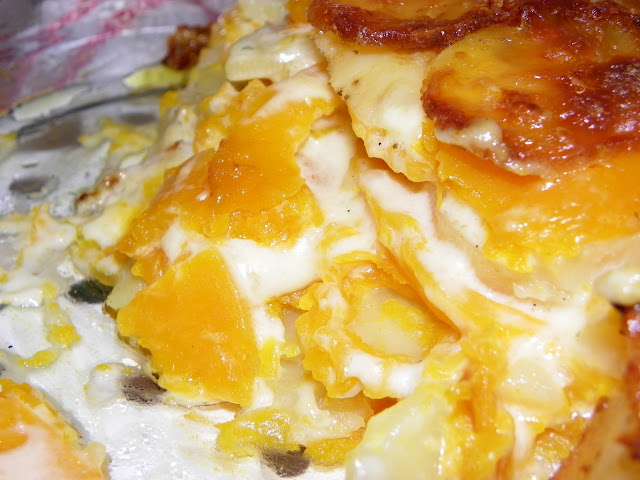 Mom always makes the trifle - Christmas and New Year would not be the same without it. 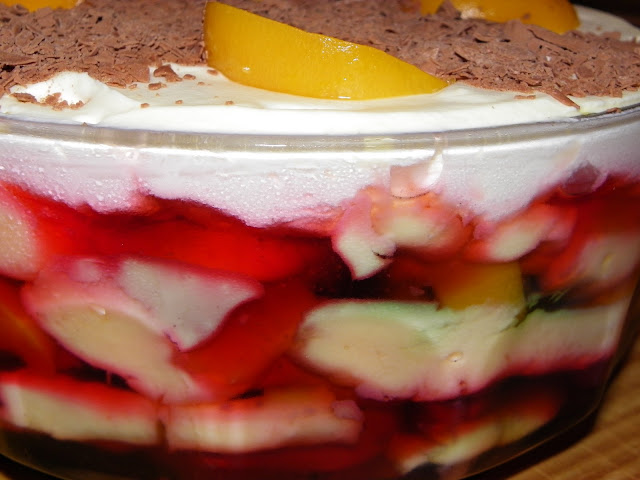