Do "real men" eat quiche? Not many I know, truthfully speaking most South African men view chicken as a vegetable!

So what's the deal with not eating quiche? It started with the tongue in cheek book by Bruce Feirstein : Real Men Don't Eat Quiche . It was followed by a few sequels which included : Real Men Don't Cook Quiche; Real Women Don't Pump Gas, Real Kids Don't Say Please, Real Women Never Pump Iron and Real Women Send Flowers. As you can see, it's these kinds of stereotypes that help us see just how silly we humans are - just like the Silver-back gorilla who beats his chest to show how strong he is.

This is another futile attempt to fight the confusion of contemporary men about how they ought to behave, after a decade of attacks by feminists on traditional male roles and beliefs. Poor guys, they really don't know what they are missing.

I suppose if it was called a pie, they would have taken to easier - but "quiche" doesn't sound like something which mixes well with too much testosterone!

As I am eating alone, I can make quiche and eat it without threatening my husband's masculinity. Although I am sure there are plenty of men out there who would gladly eat this and enjoy it - although not while watching a football or rugby match with their friends. 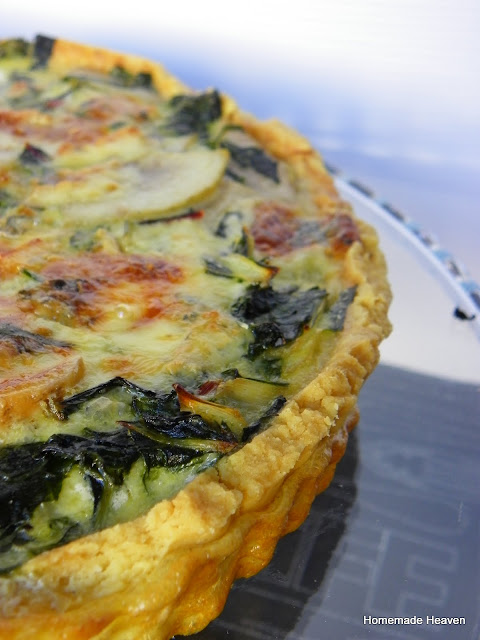 Pre- heat you oven to 200ºC
Blend the Flour and the butter in your processor (you can do this by hand my grating the butter and then rubbing in the butter to resemble bread crumbs).
Add the yolks one at a time until the mixture come together in a ball.
Flatten out the ball and wrap in in plastic wrap and refrigerate for at least 30 minutes.
Roll out your cold dough and place in a quiche tin. Freeze for 10 minutes.
Blind bake for 20 minutes. (click link for instructions on blind baking)
Remove the baking beans and bake for a further 10 minutes until cooked and pale golden colour.

Cook the pear in the butter until they are slightly soft and starting to colour.
Add the chard and cook until soft. Use a higher heat and stir continually to stop liquid forming.
In a separate bowl, mix all the other ingredients.
Place the pear and chard at the bottom of the prepared pie crust, evenly distributing the ingredients.
Carefully pour over the cream, egg and cheese mixture, also making sure to get even distribution of the cheese.
Bake in the oven for another 15 minutes, until golden brown, but still slightly soft to the touch in the middle.
Allow to cool slightly in the tin before removing and serving.
Best served warm but not hot. 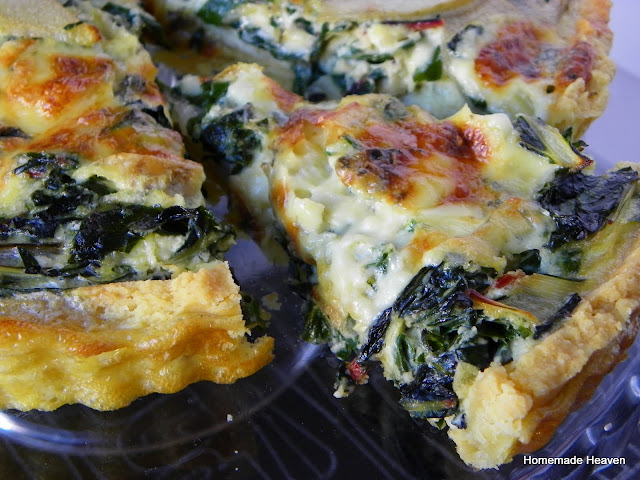 Be who you are and say what you feel,
because those who mind don't matter
and those who matter don't mind.
~Dr. Seuss

Email ThisBlogThis!Share to TwitterShare to FacebookShare to Pinterest
Labels: vegetarian

That is such a robust and rustic looking quiche that it will please real men!!! The pastry looks to-die-for!!

I'll tell you a secret - my husband LOVES quiche. Especially spinach & feta quiche. I'm sure this one will go down a treat with him!

So there we have it - REAL men do eat quiche! Especially if their wives say so!

Mine does too, but my son doesn't because it has eggs in.
This sounds like a great combination. Inspired by the wonderful pear tart on Sunday? i'm still salivating over that!

I first heard this saying from my husband (he insists that real men indeed DO eat quiche), and wondered if it was an Aussie saying. Live and learn. I love the sound of the caramelised pears with the blue cheese. Great recipe, thanks.

Fabulous recipe and photographs - can't wait to try this. You obviously have a talent in the quiche-making department!

Grief, that looks insanely delicious... I am definitely going to give this a whirl this weekend. Thanks!

I haven't thought of using blue cheese in quiche, thinking its taste going very well with swiss chard. Men eat quiche or not, I am sure all of us loving looking at yours, beautiful work!

SavoringTime in the Kitchen said...

Real men don't want to admit they eat quiche but I've never met a man who doesn't like eggs and pie crust ;)

What a wonderful recipe and beautiful quiche! I love the sound of the pears and blue cheese together.

I love quiche! And this creation of yours sounds delicious. I don't like eating blue cheese on its own but I can imagine it would blend in nicely here.

Oooh, I love the combination of flavours here! Makes a change from the usual spinach and feta :) I rememebr the Real Men Don't Eat Quiche book - I don't even think my dad knew how to pronounce quiche when it was first published!!