The fourth morning comes after an uncomfortable sleep. There really is no truth to the rumour that a yoga mat is all you need for comfort, especially when you're sleeping on a gravel floor. By this stage I have a huge welt (the skin was about to break) on my hip from my bag and bruise on the side of my buttock from trying to sleep on my side.

But life goes on, and complaining certainly doesn't get you sympathy when others have feet that look like they have been through a meat mincer. Lori's feet were not getting any better - and even all the blister experts (which all hikers are) could do nothing to ease her pain. What didn't help was that we had a hard 17kms of hiking along the Tsams River gorge, and a steep hill detour around a waterfall to get to Tsams Ost shelter. 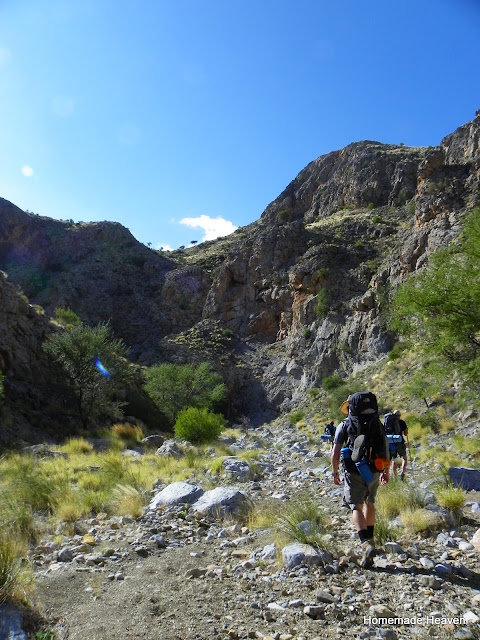 Walking in a river bed is very hard, at times you have to climb over boulders (which exhaust you) or walk over very sharp rocks (which make your feet burn like fire). It takes a lot of concentration and twisting ankles are the order of the day. You might wonder how I can walk for 7 hours and have relatively few photographs? Simple - I was in survival mode and not part of a National Geographical team, with no Sherpas and seconds to help. 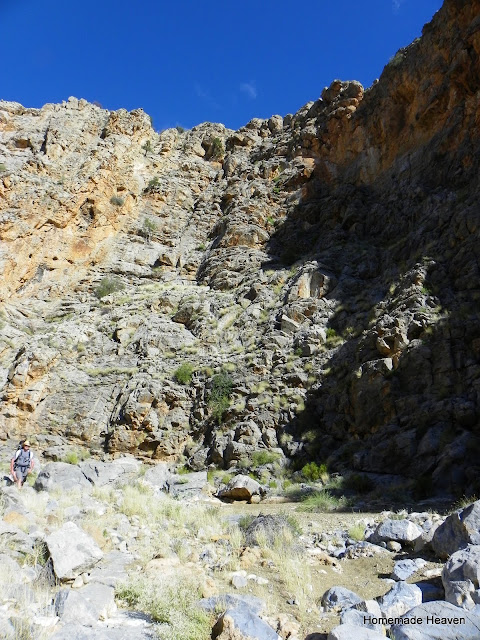 We started the day walking along the river bed. As I have explained this is hard, but manageable. We passed some spectacular trees and a dead Zebra. We also spotted the baobab-like phantom trees, possibly named because their white bark looks ghostly in the moonlight. 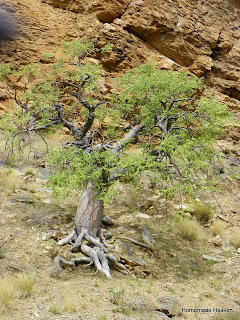 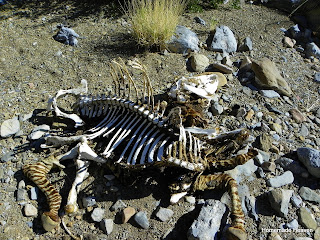 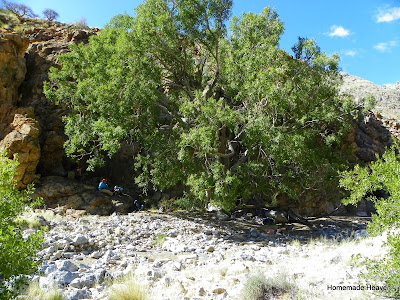 We had to take a detour from the river, which was extremely hard. It was a steep hill mountain and then a very tricky descent, down a shale path (and I use the word path very loosely). Every step you took, you would slide 2 further and not always feet down - which you would think makes going quicker, but no. Every time you slide, you have to stop yourself from going straight down, head first, bag following, pushing you harder towards you goal - with only thorn trees and boulders to "help" slow you down. Here is the picture of the "hill" which which descended, don't be deceived by what looks like grass - it's not, they are little thorn bushes (sorry about the lighting). 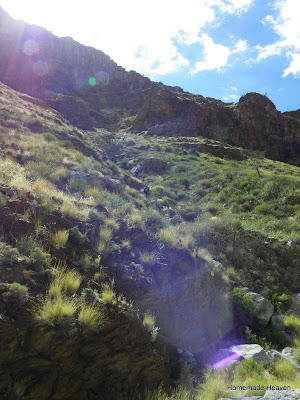 We stopped at the bottom of the hill to have lunch and view the waterfall, the reason we could not have continued down the river gorge. 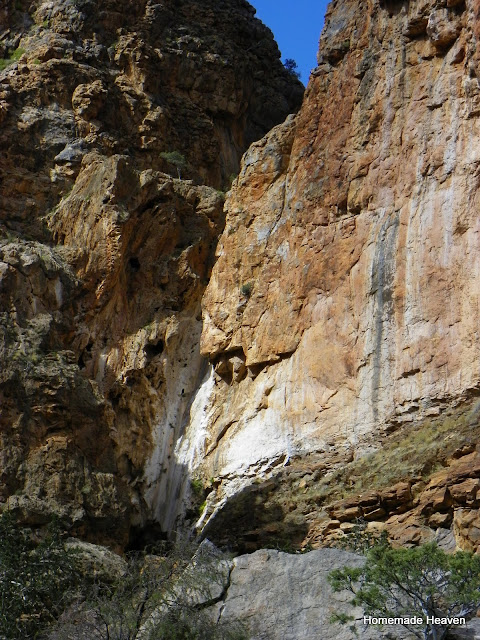 The worst was over, we now only had to follow the river for another 1½ hours and we would be at the shelter.
We were about 45 minutes from the camp when we were met by Norm and Lucy, who were very surprised to see us so early. It was a relief to see that they had arrived safe and were doing well.
We continued to walk and after 20 minutes we spotted two angels on the road in front of us - Werner (Verry) and Raymond, and would you believe? Werner was actually carrying a backpack filled with cold beer!

We had a wonderful evening round the fire that night, all 11 of us were re-united again. We all had our war stories to tell and blisters and wounds to compare.

Lori treated her blisters as best she could, but things just weren't going to get better fast enough. Jenny could not hike any further with her injured knee (and blisters) and Lucy who also had some blister problems, but  mostly concern for her sister stopped her from continuing. Raymond was defiantly not interested in multi-day  hiking, he was enjoying the day hikes at the base camp. Werner's (Verry) boots had broke, and even a trip to the tyre repair shop in Solitaire wasn't enough to convince him that his "good looking" boots were going to hold up against the terrain we still had to cover.

So, there I was the only girl left, for the second year running! I didn't mind, hiking with guys is lots of fun and they really tell funny jokes. The only problem was, now I had no girls to talk to and once again got the reputation of "talking too much". Men just don't talk, they like to sit or walk in silence and that was just too hard for me.

We had a great meal of biltong stew with lentils and smash and some of left over wraps from the KZN team - huge treat.