Football fever is all over my world, even though I had never watched a game before this month. I am now an expert and as most armchair players, I have opinions on every aspect, from team choices to coaching styles. I am so proud of Bafana Bafana, even though they lost, I think South Africa is the ultimate winner.

So the competition continues without us and I am turning my attention to the remaining teams. To honour a previous host country I made a traditional Italian dish, which will hopefully inspire them to play well in their last pool game and console them for their loss in the rugby last weekend (and the up coming rugby game on Saturday). If Italy don't win tomorrow, they'll too be going home with nothing other than the t-shirt! 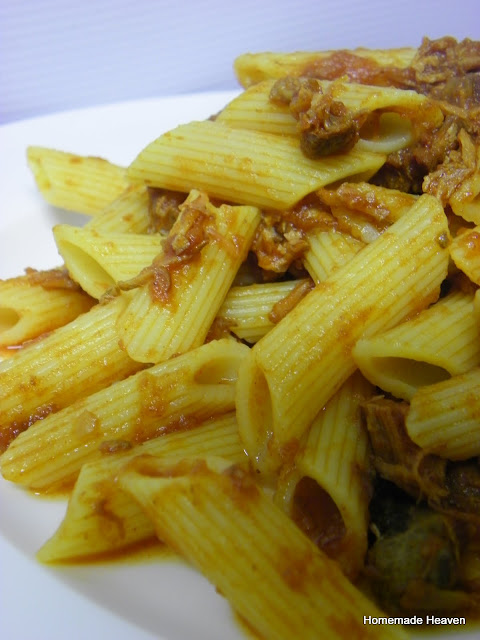 Pre-heat your oven to 180°C
Fry the onions and the meat (in an pot which can be used in the oven too) until browned in a little olive oil.
Add the rest of the ingredients and allow to come to the boil.
Place the pot in the oven for 2-3 hours until the meat is very tender and the sauce has thickened.
Remove from the oven, check seasoning and adjust to taste.
Using a fork to shred the meat.
Cook the penne until al dente and mix with the meat sauce - serve.

Oh yes - that does look like a tasty recipe.

The Aussies HATE the Italians, because it's the Italians that beat Australia last World Cup with a very contreversial penalty. Of course, the Aussies never make any mistake like that!

Madmom - It's a great dish to make while watching a game or two!

Adele - Really? So now the Irish hate the French and the Aussie's hate the Italians and El Salvador and Honduras went to war over a soccer game - this is certainly a game which doesn't make friends!

What a delicious-looking ragu! Can't wait to try this one...

Shin is such a perfect cut of beef...cheap, packed with flavor from the bone and marrow and it makes a beautiful ragu!!

I know, it's incredible! Definitely not just a game. I once heard about a player that got killed because he scored an own goal. As for the Aussies, you'd think four years is enough to get over it, but obviously this grudge is sticking.