Cape Town is the first African city, and one of seven progressive cities in the world, to officially endorse a Meat-free Day a week for the sake of animal welfare, human health and climate change.

The City’s Health Committee unanimously backed a call by the Compassion in World Farming organisation for Capetonians to pick one day of the week where they eliminate red meat from their diet and eat more fruit, vegetables and grains instead. (source City of Cape Town)


When I heard this initiative announced on the radio, I believed that this was one of the most progressive health ideas our leaders have come up with. After the debarcle when  'Manto' Tshabalala-Msimang announced beetroot and garlic were more effective treatment of AIDS than antiretroviral medicines, heath advice from government have been met with much scepticism.

I have featured Meatless Monday before and I strongly endorse it, even though I can't always make it on a Monday, we still have at least one meatless meal per week. This not only make sense for our health, the environment but also on my purse!

I have not been at a loss for ideas, which I often find when it comes to meaty meals. I really try to be more imaginative on the meatless days and I enjoy the challenge.

This weeks meal is so simple to make but will impress the fussiest carnivore. 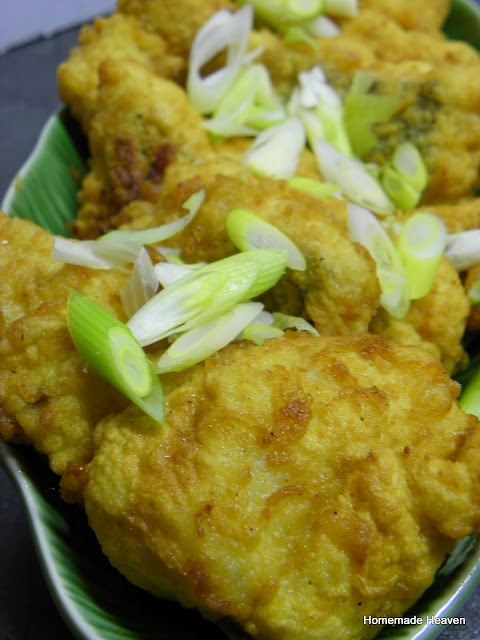 Pre-heat the oil to about 185ºC (Medium Hot)
Dry the fish.
Dip the fish into the flour and then into the egg and then again into the flour.
Deep fry for 3-5 minutes until golden and cooked through.
Drain on kitchen paper.
Serve with Egg Fried Rice and sweet and sour sauce.

Pre-heat your wok to smoking
Place 15 ml Oil in the wok.
Add the egg and allow to cook, omelette style.
Once the egg is crispy and cooked through on both sides remove from the wok - cut into small pieces.
Fry the onion pieces until they have some colour, but are still slightly crunchy.
Add the rice, the cut up egg, the peas and stir fry until the rice is hot.

Serve the fish with this sweet and sour sauce and egg fried rice. 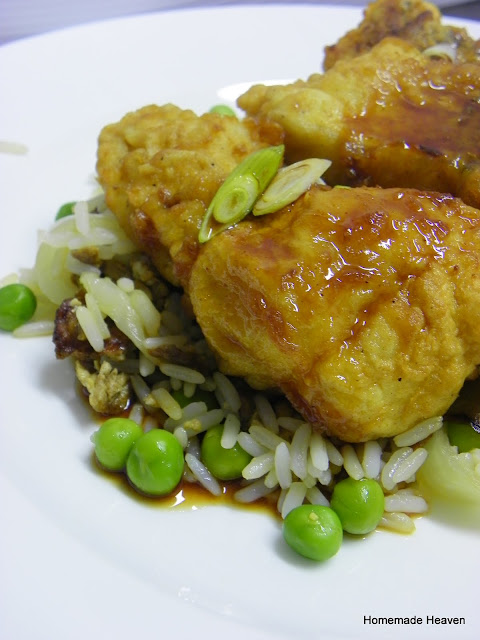 Boil the above at a simmer for about 1 hour, until reduced and thickened.
Strain and serve hot.

I could eat that every day, looks just up my alley.
We can't do meatless on Mondays either, there is usually too much meat leftover from Sunday and I refuse to waste. But we do meatless twice a week, so I don't feel bad.

Man that fish looks good! Now if only I could convince hubby to give it a go (I have to twist his arm veeeeeerrry far for seafood).

Oooo I could come for dinner on Monday ... or any day with this on the table.